We are back to Paul Valéry’s maxim: “Everything simple is false. Everything complex is unusable.” In the world of computer modeling, this is known as Bonini’s paradox: The more realistic a model is, the more it becomes as complex and difficult to understand as the real world; the simpler and more user-friendly a model becomes, the less accurately it represents the underlying system. Mass democracy and mass media on the American model work to impose on the complex reality of American public life the simplest possible model of politics, aggregating all of political reality into two variables: Us and Them.

Another way of putting this is that the unstated task of cable-news journalism on the Fox/MSNBC model — along with practically all political talk radio, 99.44 percent of social media, and a great deal of inferior writing about politics — is transmuting intellectual complexity into moral simplicity. Even that isn’t quite right: The moral simplicity offered by the “Everybody Who Disagrees with Me Is Hitler” school of analysis is a false simplicity — simplicity for the truly simple, as opposed to what Oliver Wendell Holmes Jr. described as “the simplicity on the far side of complexity.”

Reality is complex. But it isn’t only the cable-news mouth-holes that are engaged in the reverse alchemy of turning the gold of genuine inquiry into the dross of political rhetoric. We — we the media, and We the People — commit the same sin.

from the National Review Can We Talk?

UiTM protest 2008. Can Utusan meet the challenges of a new era? [Utusan photo]

How will TV3, New Straits Times and Utusan Malaysia report news now? Will they still shut out any news from Pakatan Harapan? They obviously can’t, that would mean not reporting on the Malaysian government. Will they be very critical? Maybe they should be.

Utusan Malaysia have continued to take the stand of preserving Malay rights. Many people slammed Utusan for being racist even though the rest of Malaysia had already moved on. Let Utusan say whatever it wants to say. It is a new era of freedom of speech. But let other people also say whatever they want. Let this discourse and debate happen in the media and just keep it from being violent. That is true freedom of speech.

Malaysian people need to increase their media and news savviness. They need to be more aware so that they don’t become gullible and subservient to all the differing opinions and information. We must not fall into a lull and must always be on our toes. — Condensed from Malaysiakini | » Can Malaysians handle freedom of speech?

Half the staff and workers at Utusan Malaysia are to be laid off. The troubled Umno-owned newspaper, which is bleeding millions every month, says it has to “rebuild from scratch”.

The company’s group managing director, Datuk Mohd Noordin Abbas, said a Voluntary Separation Scheme would be considered. The work force will be cut, probably by 50 percent from the existing 1,400 staff but the company would need to find the money to fund the lay-offs.

Similar job losses have already taken place at the New Straits Times Press and The Star, where the company announced last week that Star group editor Leanne Goh, together with the chief operating officer and the head of advertising, had taken early retirement. Senior and experience journalists had already been let go since last year at both NSTP and Star.

END_OF_DOCUMENT_TOKEN_TO_BE_REPLACED

Police reports have been filed against highly-connected political commentator A Kadir Jasin, former chief editor of New Straits Times Press, for his blog posting about the Yang di-Pertuan Agong and royalty on Monday.

Investigations are to begin under criminal provisions for sedition, criminal defamation and misuse of network facilities. The Inspector-General of Police, Mohamad Fuzi Harun, said: “An investigation paper has been opened. Once it is completed, we will hand it over to the deputy public prosecutor for further action.”

END_OF_DOCUMENT_TOKEN_TO_BE_REPLACED

Refurbishment of Sultan Abdul Samad building, which used to house the Courts, has been halted because government “debt” is too high. Opinion or fact?

In 2008, if memory serves, Tommy Thomas and others argued authoritatively in various statements that Pakatan Rakyat and Anwar Ibrahim were correct in trying to petition the Yang di-Pertuan Agong to sack the sitting prime minister, Abdullah Ahmad Badawi, and that the King had the power to do so.

I didn’t think so and at Balai Berita, it was sometimes necessary to change a declaration of such fact in a story to an assertion of opinion. Not that I have any constitutional expertise beyond that of any ordinary editor, but having watched from afar in younger days while Stephen Kalong Ningkan and later Gough Whitlam were removed, I believed this subject remained open, and was a highly contentious one at that.

END_OF_DOCUMENT_TOKEN_TO_BE_REPLACED

His on-the-record interviews with hard-news, government reporters have been relatively rare — and, rather than being wide-ranging, often limited to a single subject, such as the economy. Remarkably, Washington Post news reporters haven’t been able to interview the president since late 2009.

But a thorough study from Martha Joynt Kumar, a retired Towson University professor, describes the administration’s strategy. [Obama] does plenty of interviews…but these interviews are tightly controlled and targeted toward specific topics, and, it seems to me, often granted to soft questioners.

» READ IN FULL: Obama promised transparency. But his administration is one of the most secretive | Washington Post

Barack Obama’s remarks to the White House press corps at his last press conference as president of the United States, Jan 18, 2017

We have travelled the world together. We did a few singles, a few doubles together. I’ve offered advice that I thought was pretty sound, like don’t do stupid stuff. (Laughter)

And even when you complained about my long answers, I just want you to know that the only reason they were long was because you asked six-part questions. (Laughter)

And you have done it for the most part in ways that I could appreciate for fairness, even if I didn’t always agree with your conclusions. And having you in this building has made this place work better. It keeps us honest, it makes us work harder. You have made us think about how we are doing what we do and whether or not we’re able to deliver on what’s been requested by our constituents. And for example, every time you’ve asked why haven’t you cured Ebola yet or why is there still that hole in the Gulf, it has given me the ability to go back and say, “Will you get this solved before the next press conference?” (Laughter)

I spent a lot of time on my — in my farewell address talking about the state of our democracy. It goes without saying that essential to that is a free press. That is part of how this place, this country, this grand experiment of self-government has to work. It doesn’t work if we don’t have a well-informed citizenry, and you are the conduit through which they receive the information about what’s taking place in the halls of power. 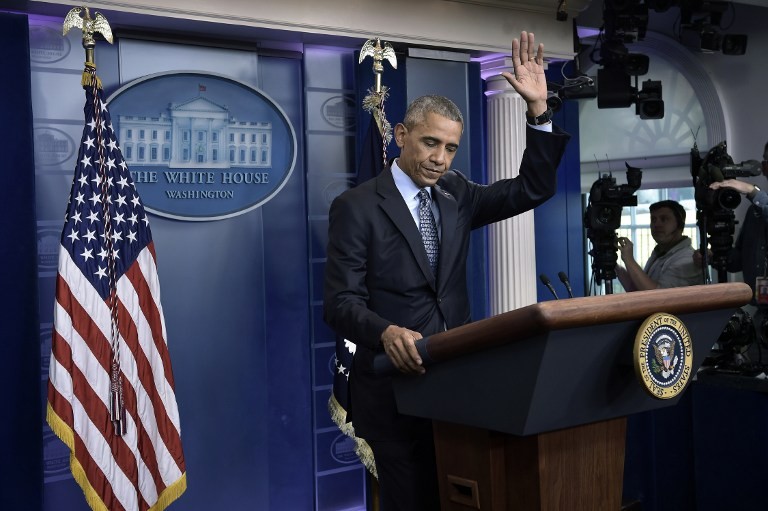 So America needs you and our democracy needs you. We need you to establish a baseline of facts and evidence that we can use as a starting point for the kind of reasoned and informed debates that ultimately lead to progress. And so my hope is is that you will continue with the same tenacity that you showed us, to do the hard work of getting to the bottom of stories and getting them right and to push those of us in power to be the best version of ourselves and to push this country to be the best version of itself.

I have no doubt that you will do so, I’m looking forward to being an active consumer of your work, rather than always the subject of it. I want to thank you all for your extraordinary service to our democracy.

It is true that behind closed doors, I curse more than I do publicly… (Laughter)

… and sometimes I get mad and frustrated like everybody else does, but at my core, I think we’re going to be OK. We just have to fight for it, we have to work for it and not take it for granted and I know that you will help us do that. Thank you very much, Press Corps, good luck. Like Loading...
Stuff published here is often facetious and irreverent and may bear no resem­blance to your reality. Take a deep breath. Don’t panic. Keep calm and carry on.
© Copyright reserved on all original content.